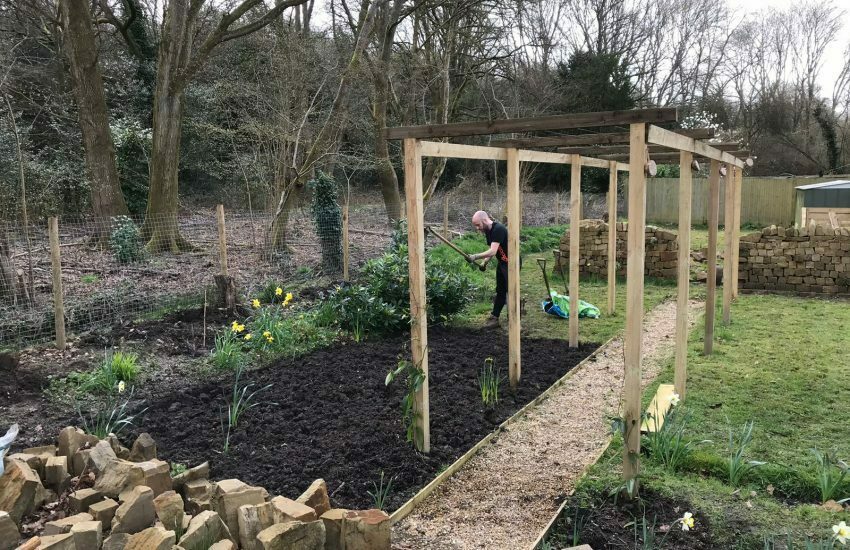 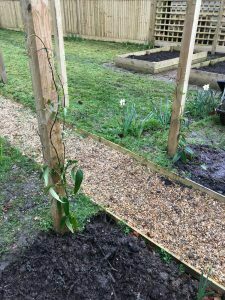 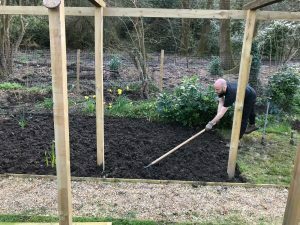 We decided that we would divide up the perennials that we bought last year and take the plunge and plant them into a mixed border. We actually started first by planting 2 clematis armandii ‘Apple Blossom’  against the front 2 pergola posts. We chose these as they are evergreen and grow vigorously so will cover the structure quickly. After planting these climbers we then removed the turf and dug out the space for the border; eventually we want this mixed border to travel the length of the pergola (on the left side) but we’ll need to be patient for all our plans to come to fruition. 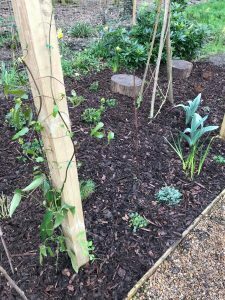 The process of dividing up the perennials was rather nerve racking..! After watching them grow all of last year it was strange to cleave them all up with a spade! This was the first opportunity we’ve  had to divide up our plants, although we’d watched it numerous times on gardening programmes it was still a little worrying! As I’m writing this post in hindsight I’m pleased to report that the perennials are all doing well – our only casualty was the holly hock (which we didn’t actually divide). Our current stand out plant in terms of growth and generally looking the most happy is the Astilbe ‘Deustschland‘.  As we have heavy clay soil we had to make sure that we applied a lot of horticultural grit to the compost mix we planted everything into (as well as a gritty bed for the plants to sit on). We finished off the border by covering the surface with a mulch of bark chipping – it smelt amazing!  One of the main reasons for having a mixed border as opposed to a herbaceous border is that we want there to be structure in the border during the winter months. As such, we have planted some evergreen shrubs like Viburnum ‘Davidii‘.  I shall post some photos in next months blog post to show you how the border establishes itself.

In April we also visited RHS Wisley which was glorious (if cold), I really liked the hostas that were planted in the walled garden section as well as the wooded section which had lots of ferns and rhododendrons. We bought a shrub from the amazing plant centre – ‘Exochordia Serratifolia‘.  We  also visited Great Dixter which was fantastic; although not many flowers were out, we took the opportunity to consider how they structure the garden. We had a great time in the nursery and bought a few things to plant in to the new border – here’s what we bought: 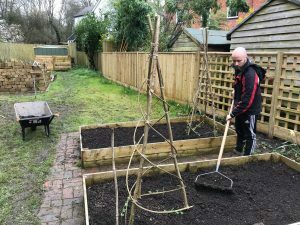 This month we also made some coppice structures that we could use as permanent organic supports. We made these out of fresh and malleable coppice growth which made it possible for us to bend the thinner branches around the thicker vertical posts. It took about 40 minutes to make from scratch and we are really happy with how they look. I planted the sweet peas – ‘Jilly‘ that I sowed from seed back in January at the bases of the 3 structures we made (2 are located in the raised beds and the other is in the mixed border).

I think my favourite project that we completed in April was making the hanging baskets. We wanted to create these with year round interest so we chose evergreens made up of ferns, heucheras and different types of ivy. The ferns we chose were: ‘Polystichum Tsussimense‘, and a ‘Polypodium Vulgare‘. We also bought some  ‘Heuchera’s‘ – we chose ‘Ginger Peach‘ and ‘Black Beauty‘. As we are focussing on foliage we tried to use a range of textures, colours and leaf shapes; the ferns helped achieve height and we also used 2 shrubs in each basket to provide some structure. We also thought it would be good to have some annuals for colour so we bought some trailing white ‘lobelia‘ plugs. We liked the fist 2 baskets so much we decided to make another one, this was constructed with the same foliage theme and hangs by the front door. I think my favourite plant in the hanging baskets is the ‘Ruffled Heart’s Tongue Fern‘ which is in the one hanging by the front door. 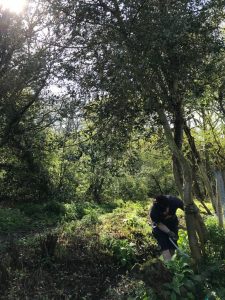 For the shady spot which is located at the front of the house I created a small Hosta pot display (these plants thrive in light to medium shade) – I bought a variety called ‘Hadspen Blue‘ as these have white flower spikes which goes with our colour scheme. Our neighbour gifted us another type of hosta at the end of last year and it seems to be doing something! The last thing we did in April was cut down the 2 scraggly holly trees that were on the bank – we get so much more light now – I can’t wait to chop down the others..! 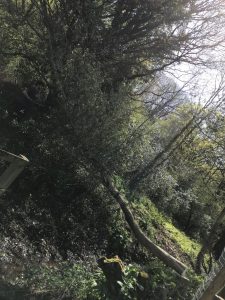