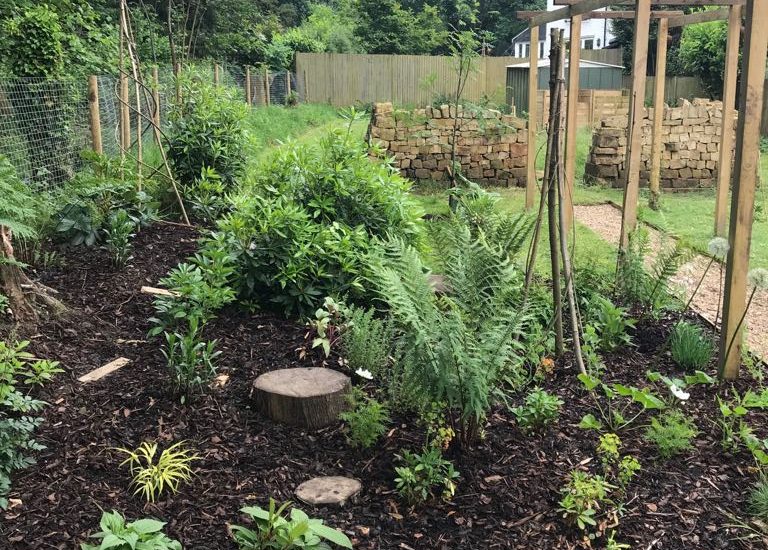 One of the first things we did this month was visit ‘Isabella Plantation‘ in Richmond Park. I highly recommend this place – its totally magical. It feels like a secluded woodland and is dominated by huge rhododendrons and Azaleas – It’s so colourful at this time of year. My favourite part was the stream that runs through it, it’s bordered with native ferns which looked so lush. I’ve been meaning to go for so many years – i’m going to make sure that we go every year henceforth! 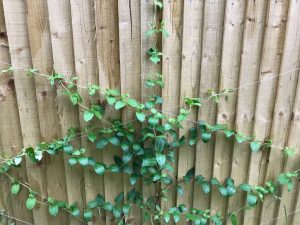 Over the first bank holiday weekend we made the most of the garden centre (!) and bought a haul of new additions for the garden. We wanted to cover the fences that were built last year so we decided on a Japanese honeysuckle aka lonicera japonica ‘Hall’s Prolific‘. As the name suggests this plant is a particularly vigorous, semi-evergreen grower (ultimate spread – 20ft by 20ft) and so will 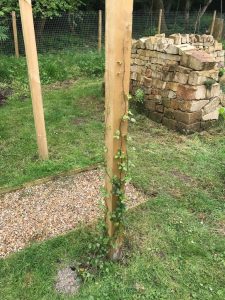 hopefully cover the fences soon. We decided that we would train them in – they seem to like this as are sending out new growth shoots on these horizontal branches. We also bought a clematis cirrhosa ‘Wisley Cream‘ (ultimate spread 13ft by 6ft) to plant at the far side of the pergola. This is also an evergreen winter flowering climber that produces flowers from late autumn to early spring. We thought this would compliment the evergreen clematis we already planted at the other side of the pergola, (‘Armandi‘) as this flowers in early to mid spring. Looking back at my post from July 2017 its wonderful to see how much the star jasmine (‘Star of Toscana‘) has grown since last year! 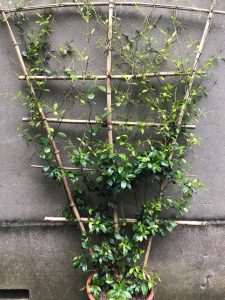 This month we also bought the following which we will plant out in the mixed border and around the garden:

We planted our second tree into the garden (I forgot to say that we planted out our Rowan tree last month. I bought it in Sainsbury’s in 2015 to celebrate the Queens 90th Birthday – miraculously it’s survived so far!). We chose a multi stem silver birch called ‘Betula utilis var. jacquemontii‘; eventually we want to have 3 of these specimens in the garden as they provide height, year round interest (thanks to the silvery bark) and only dappled shade due to their small leaves (that also rot down very quickly apparently). 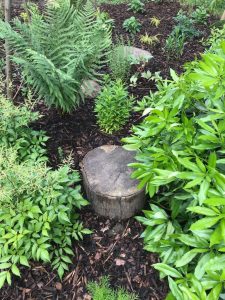 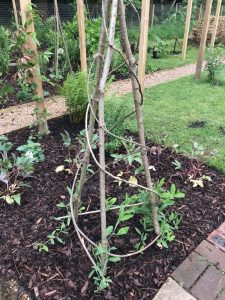 One of the last things we did this month was to create a small bed adjacent to the pergola – we planted out the hellebores we bought earlier in spring as well as the Fuji Cherry tree (‘Kojo-no-mai‘). We also bought some perennial sweet peas ‘White Pearl‘ and  trained them up some additional coppice structures we had made; these supports have sprouted numerous leaves and small branches so we have our fingers crossed they’ve rooted. The last plants to go into the new bed were the ‘Alchemilla mollis‘ that we took from gran and grandpa’s garden. Similarly to the main mixed border, we used bark as a mulch to help retain moisture in the soil as well as suppress weed growth – it also looks much nicer than bare soil. 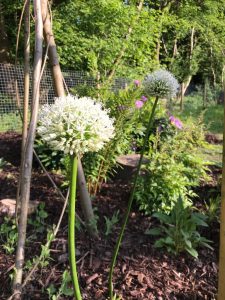