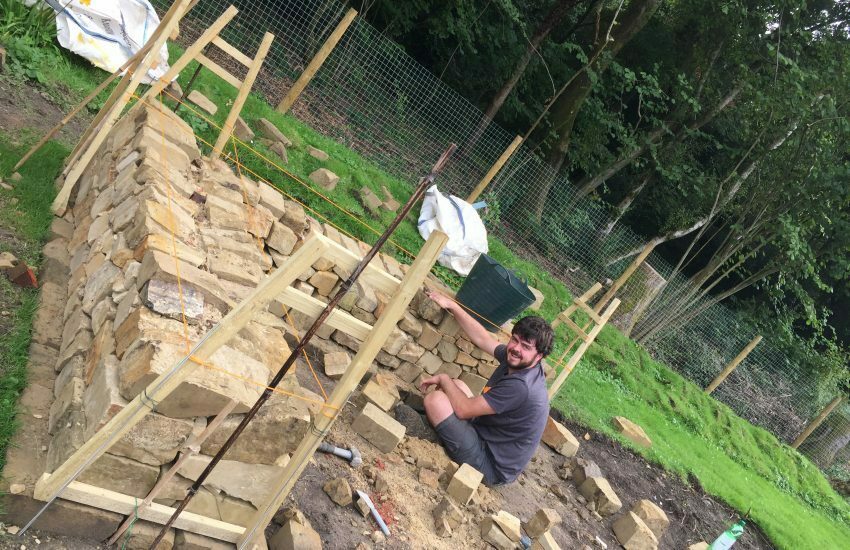 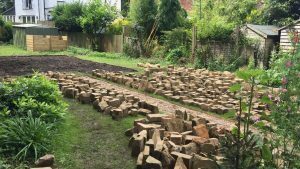 On August 1st, our first delivery of sandstone arrived! We bought 8 bulk bags worth – as you can see it was rather a lot! As I was at work, Luke had to move it from the street, which is down a short track, to our cottage (as the lorry couldn’t fit down). Luckily a really kind neighbour helped him move the stone and even gave him lunch; I was obviously devastated not to be there (!)

When we first pegged out the shape of where the walled garden would be I was really keen for it to be sunken; however, when we first started digging out the area a neighbour poked her head out the window and asked what our grand plans were. She was keen to point out that the water table is high in our area so we’d have something more akin to a swimming pool in winter if we dug down – it was fortunate she was there that day! 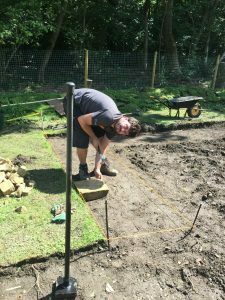 Initially we thought about building a reclaimed brick wall but after mulling it over we decided that a dry stone wall would be more appropriate. Over the course of August, very much like the tortoise, we worked slowly but surely on the wall. We always knew it would be a case of learning on the job, and we certainly learnt a lot (near vertical learning curve!) We are both perfectionists so it was slow going, but rewarding when the courses started taking shape. By the time we finished the first 3 courses we realised a few of our mistakes and took some of the wall apart before continuing; although frustrating at the time it was worth it for the overall structural integrity. As you can see from the photos, we also took the time to construct the ‘A’ frames as well as use ropes to make sure that the batter (the sloping sides) was even.

Overall, the first right angle of the wall took about 3 weeks (working on and off). When we’d completed all the courses, including laying the coping stones, we went to our local garden centre and chose some alpines to plant into some of the cracks. Eventually our plan is to pleach some apple trees around the 4 right angles of wall -there will be 4 entrances that connect each corner. The biggest surprise of building this dry stone wall has been the cost! We’ve realised that we’ll actually need a lot more than we were initially advised. It may take several months longer than planned considering the amount of stone we’ll need for all 4 right angles..!

Here are some videos of the wall construction process: