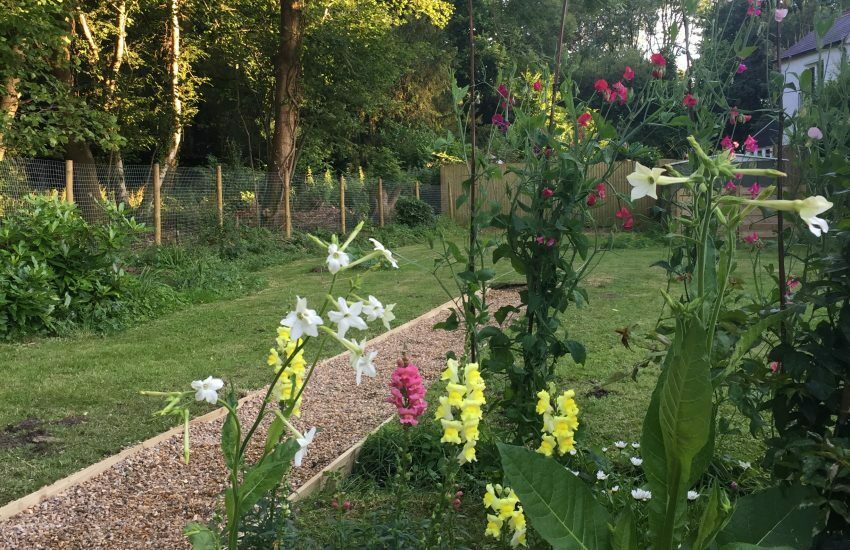 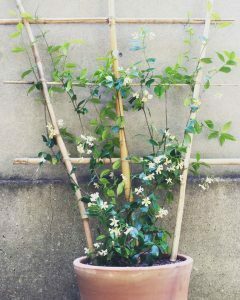 July 2017 was a busy month for us in the garden! We have started off by planting this trachelospermum jasminoides (aka star jasmine) into this pot – we also made this bamboo support from the spare pieces we’d pruned off next doors plant that was leaning over the fence. We’ve put this outside the front door in the hope that this will one day sprawl across the house in an evergreen carpet!

On the 9th July we started building the path that would lead to the dry stone walled garden that we were planning on building in the middle of the garden. Building a path like this was a new experience for us and although this ended up fine, we initially did not dig deep enough and when we laid the gravel on top, any lumps and bumps in the substrate poked through… so basically we had to remove the plastic underlay and dig deeper in to the soil – once we had done this it was fine but was rather annoying at the time!

In hindsight we have decided that we will remove the gravel and put down self-binding gravel (up the path and also around the walled garden once this is built); we envisage that this will make it easier to maintain, like sweeping leaves away etc.

After we completed the path we then started work digging out the area that would become the walled garden (15th July). Removing all this turf was a particularly arduous task, but we got there eventually. As you can see form the photo with me in the middle, this is where we are planning on having a tree or water feature. I think I’m more geared towards a water feature of some sort at the moment – I’m thinking some sort of old stone trough with low level planting around it? Anyway we’ll need to wait until we’ve built the dry stone wall entirely before embarking on the design of the central section. The reason we’re constructing this stone wall is so that we have privacy and an area of the garden to sit and chat. In all the gardening programmes and books I have read they talk about how you should construct the hard landscaping of a garden so that the viewer is taken on a journey… so basically not be able to see every aspect of the garden. We hope to pleach apple trees around the wall so that it also has height – this will serve us two fold in terms of providing privacy when in the walled garden but also adding structure and height to the garden as you walk around it… that’s the plan anyway! It will also blossom and fruit so it will provide lots of year round interest – can’t wait to get started on all of this.

The last thing we did in July was fell the old ash tree; its branches extended right out over the garden and it blocked a lot of light. Felling the tree was the right thing to do as it was diseased and definitely passed its best! Removing it has meant that the garden has a lot more light which is great. Above is a photo of the ash tree before and after it was felled; below is a time lapse of the ash tree coming down.