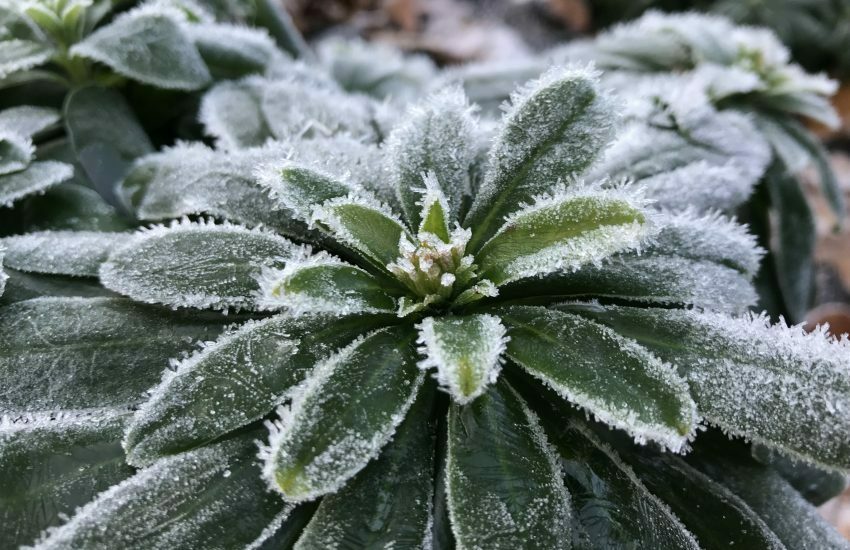 I took some annual leave in the run up to Christmas and made a conscious effort to not become totally sedentary – I recently got a fitness watch so wanted to see if I could maintain some semblance of fitness. I decided that walking would be our activity of choice and we went on quite a few decent ambles in the Surrey countryside.  My favourite was a 6 mile course around Ranmore Common, you can see the National Trust owned Polesden Lacey house from the lower fields. The longest walk we managed over the festive period totalled 9 miles (Horsley Jubilee Trail); we didn’t think this was nearly as picturesque as around Ranmore so we shan’t do that one again.

As you might expect December saw little toil in the garden, having said that, it was still a pleasure to look out as well as explore how the plants were holding up over the first frosts of the season. The evergreens looked especially great in their coats of ice – I managed to take some photos before my hands got too cold.

As well as enjoying the garden in this dormant state I was thrilled that the birds came back – and with quite a vengeance. As I reported in last month’s post they had quickly vacated the garden once the bird feeders were taken down (due to a pesky mob of squirrels).  We’ve had mixed results with the squirrel proof feeder; at first the squirrels won outright by working out how to shake and prise it open. I then fought back by using plastic garden twine to seal the lid shut as well as fasten it to the hook on the pergola. I’ve learnt during this process that squirrels are certainly tenacious – they haven’t yet totally given up – I’ll tentatively say that I’ve won this battle, although probably not the war.

We’ve had a busy year in the garden and achieved quite a lot, as well as learnt a considerable amount through trial and error. I thought it would be a good idea to reflect on these experiences, both good and bad:

Final thought – we visited the refurbished temperate house at Kew during December, the scale of the buildings was awesome – climbing the old stairs to the roof platform confirmed that I really don’t like heights.