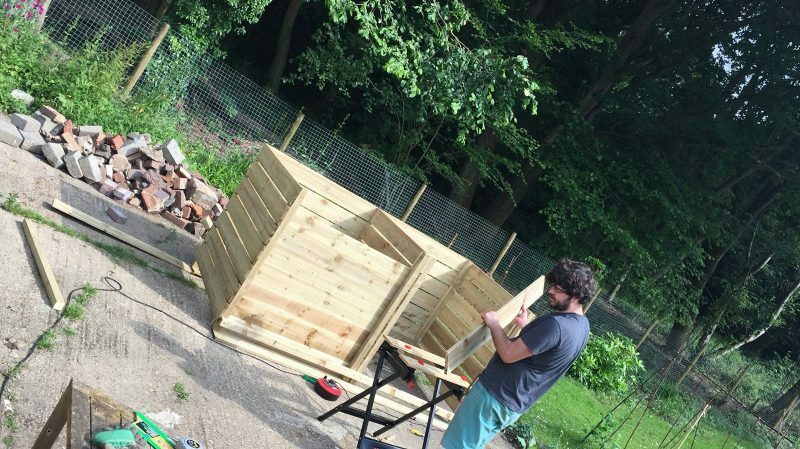 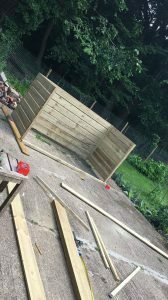 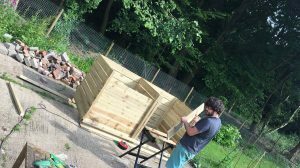 With all the grass cuttings and pruning stacking up, we thought June was an opportune to build ourselves a composting station! That’s right – no bins here! We went to our local builders merchants and bought all the materials and (literally) carted them on the trolley all the way back home… My partner then worked like a trooper, under my watchful gaze and we (*he) put it together in no time at all!

Whilst building it I did think that perhaps it w rather large, initially we had intended it to have 3 compartments (because Monty Don said that was the right thing to do) but in the end we thought that perhaps that was a little excessive for what is not a massive garden after all. The result after what was a very hot day was no blood, some sweat and no tears – so a real triumph! It’s really great as it has removable front planks so you can fork it to your hearts content. I’m pleased to report that the grass cuttings (and kitchen waste etc.) from 2017 is composting nicely – we’ve forked and moved it all in to the second compartment to rot down some more; fingers crossed we should have some quality home made compost for my garden this year! 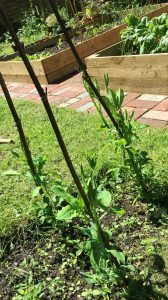 In June I also planted out my Lathyrus odoratus (sweet pea seedlings!) that I had been diligently watching over on a windowsill in the house for a few months; we constructed a bamboo cane support for them and that really worked well. I didn’t think it would, but the sweet peas really did grow up and over the tallest cane so I had give it a hair cut on a few occasions…the result was some really gorgeous blooms; as I kept on top of picking them (mostly!) they romped away for a few weeks producing lots of flowers for the house.

I did notice towards the end of the season that the aphids had also taken a real shine to them, with what was quite a massive horde of them by the end. I’m not sure why this was, as I would have thought the birds would have munched them but apparently not. I’m really not keen on using pesticides so I shall have to consider what I do about this in 2018. I have also been thinking that for 2018 I want my partner (aka slave) to build me some sort of permanent obelisk construction for climbing plants… 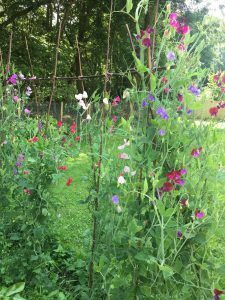